Never during a gaming experience have I felt as uneasy and as paranoid as I did during my playthrough of Hellblade: Senua’s Sacrifice. The game tells a touching story through the lens of psychosis. It experiments with the video game medium in a way that I have never seen done before by finding creative ways to depict mental illness. Although the combat lacks significant depth and some of the puzzles can be hit or miss early on in the game, these gameplay shortcomings are largely forgivable given the majesty of Hellblade’s presentation and storytelling. 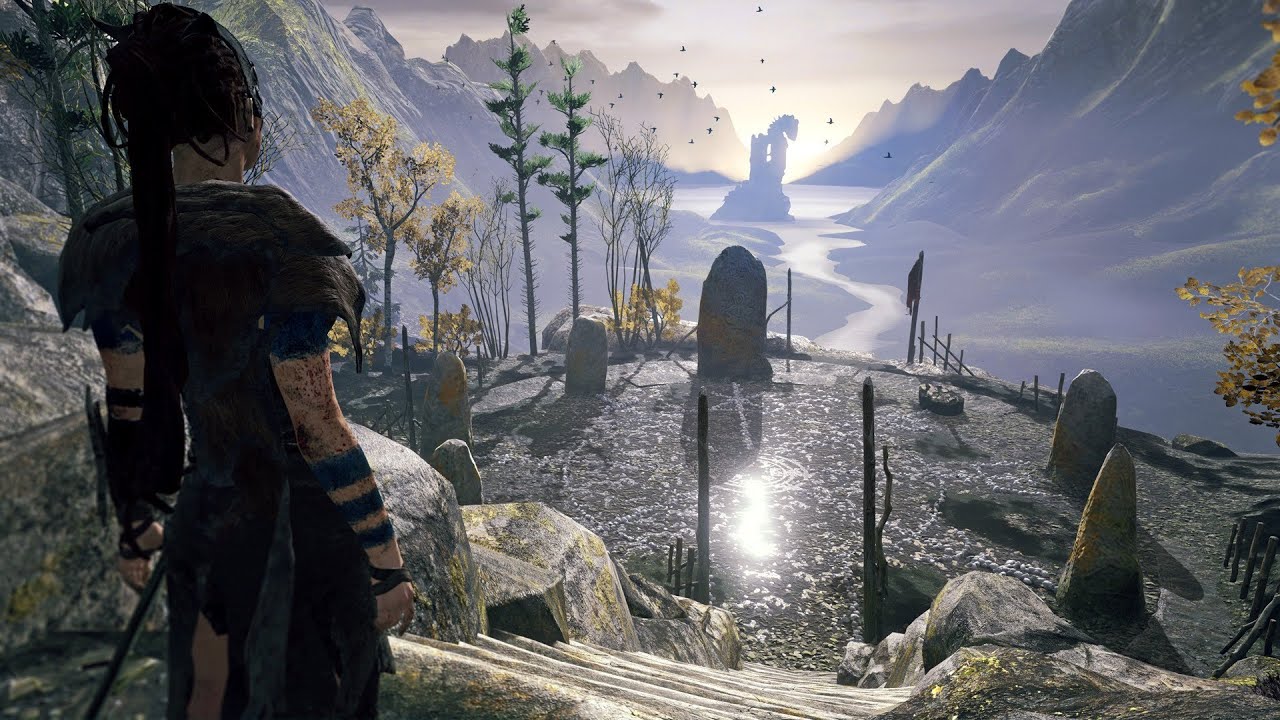 The story of Hellblade is built on Celtic and Norse mythology. It revolves around Senua’s personal journey through a cursed land. To go any more in depth regarding the story details of Hellblade would be to spoil the game. Hellblade is a narrative driven experience comparable to Gone Home or Firewatch. More so than the combat or puzzles, the story is what you are here for and it is moving. Psychosis and mental illness are the focal points of the narrative and they are treated respectfully and utilized expertly to give the story tension. Hellblade Senua’s Sacrifice also earns the intense emotional moments that we experience with the main character. Senua is developed believably and her journey with psychosis is easy to empathize with by the end of the game because it is in your face throughout the whole experience.

Upon booting up for the first time, the player is advised to wear headphones during their playthrough of the game. This may seem like a suggestion at first glance, however the sound design in Hellblade is integral to the experience. Throughout the game, the player experiences Senua’s psychosis through the disembodied voices speaking to Senua non-stop through the Journey. Ninja Theory uses binaural audio which is a recording technique that simulates three-dimensional sound and space. This means that while playing, the voices that are heard range from distant to close, alternating between left and right and this intensifies the experience. There were moments where I felt like I was actually going crazy while playing the game. At one point when the voices grew too much to bear, I found myself saying the word “stop” out loud unintentionally. It was a moment that caught me off guard and shows the power that Hellblade’s audio design has in immersing the player in the experience. Ninja Theory’s use of Binaural audio is a clever way to approach depicting mental illness and I commend Ninja Theory for their commitment in being experimental and having it ultimately be successful in execution.

Hellblade is a technical masterpiece in both its audio execution and visual beauty. It is one of the best looking games I have ever played. The facial capture and animation of the main character are unlike anything I have ever seen in a video game especially given how well the expressions on Senua’s face sell her emotion. Even when there is no dialogue, Senua’s pain, agony, fear, and desperation are easily identifiable. This also adds to the fact that Melina Juergens’ performance as Senua is phenomenal. When Senua screams for help, I feel it. When she feels hopeless, I empathize. Her face tells a story on its own.

The first couple of hours of Hellblade start off slow as you’re introduced to the combat and the environmental puzzles. Combat in Hellblade lacks some depth and variation which is forgivable given that the game is only about 7 hours long. The short duration complicates the idea of some sort of technical upgrade system or deep combo trees. With not much time to learn and progressively master combos, what you see is what you get with Hellblade’s combat. The button layout and overall systems at work are fairly barebones. Even though the combat lacks variation in execution, Hellblade does spice things up in two specific ways. Firstly, the game teases that if you lose too much, all of your progress will be wiped. Being unsure whether your next death could possibly be your last helps add some intensity and stakes to the combat. Secondly, Hellblade adds variety by increasing the number of enemies you are fighting at a time and varying the types of enemies you encounter. Even with this being the case, the combat is still noticeably stale which is not as big of an issue when taken into consideration that combat is not as core to the experience as the problem solving moments of Hellblade are.

The environmental puzzles range from okay to expertly crafted as Hellblade invokes games like The Witness and The Last Guardian. The first hours of the game can get boring as you find yourself solving the same types of puzzles over and over again. However, this pays off as what you learn in these first hours builds the foundation for these puzzles to permeate in creative ways through the rest of the journey. There were multiple moments while playing where I was blown away by the mind-bending nature of the puzzles and the way that the game uses perspective for both the sake of storytelling and problem solving. There are even parts where you need to rely on purely your sense of sound to guide you through to the next part of the game. After the beginning hours of the Hellblade, the puzzles become some of the most satisfying I’ve experienced in a game of this nature.

Hellblade: Senua’s Sacrifice pushes the boundaries of what video games can do for storytelling. Senua’s struggle is depicted beautifully and uniquely in a way that allows the player to empathize with what she is going through. Despite a slow start, the gameplay ultimately picks up the pace and creates awe-inspiring moments through the use of perspective and clever design. Hellblade stands out as one of the most beautiful games I have played in a long time and I can only hope that the technology that is used to evoke emotion this game will inspire how other games in the future will approach their own subject matter.

Death Stranding: An Excellent Journey with a Cumbersome Conclusion